SMART Goals Are for Losers 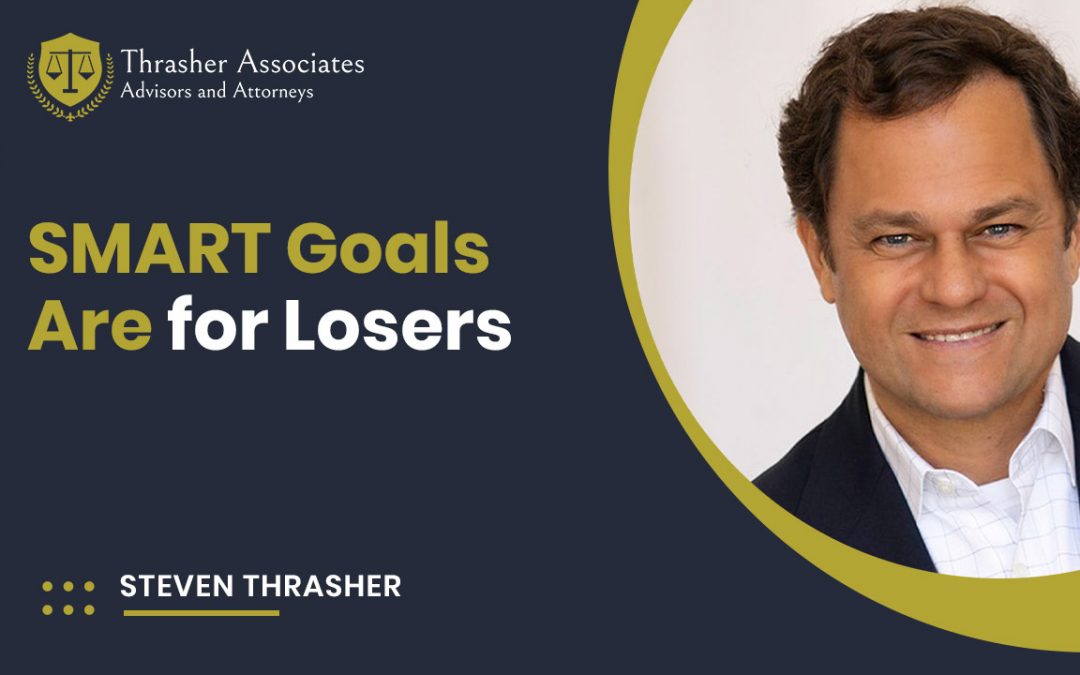 Do you ever find yourself questioning a belief that has been accepted for so long that it seems wrong to even doubt it? The concept of SMART goals has been around for decades and is the commonly accepted practice in most business circles.

The SMART goal acronym declares that goals should be: Specific, Measurable, Attainable, Relevant, and Timely.

Of course, we want goals to be specific, otherwise we don’t know what we’re shooting for. They also need to be measurable, or we won’t be able to track our progress or know when we reach them. It also makes sense that goals should be relevant to the business and mission at hand. And goals should be timely in that they have a target completion date.

But it’s the Attainable element of the SMART goal formula that I take issue with. Attainable goals are safe. They’re practically a shoe-in. They’re namby-pamby. What’s the sense of only setting goals you know you can reach? Maybe attainable goals are okay for run-of-the-mill employees in a big corporation who live to maintain the status quo. But what about us entrepreneurs who are reaching for the Moon?

That’s why I think SMART goals are for losers. A goal that you know you can achieve is hardly a goal at all. Besides, how does one even determine whether a goal is achievable? Is it because it’s what we did last year? Or maybe it’s the “industry standard”? Perhaps it’s what everybody else around us is doing. Or maybe we’re surrounded by naysayers who insist we can’t reach any higher and we’re giving them too much credence. No one ever accomplished anything great by only setting goals they knew they could achieve.

What about you? I’m not content with only setting goals I know I can attain. (Yawn) How boring is that?

We need to set our sights beyond what we know we can achieve. We need to constantly press the limits of what’s already been done. We need to keep asking, “What if…?”

On May 25, 1961, President John F. Kennedy boldly proposed that the US “should commit itself to achieving the goal, before this decade is out, of landing a man on the Moon and returning him safely to the Earth.”

All you have to do is look at the automobiles, televisions, radios and other technology of that day to recognize how preposterous this goal was. Such an outlandish goal was still considered science fiction!

Yet, on July 20, 1969, Commander Neil Armstrong and Buzz Aldrin landed safely on the Moon in the Lunar Module Eagle. Then they launched away from the Moon, redocked with the Apollo 11, and returned safely to Earth.

Friends, that was no sissy goal. President Kennedy didn’t follow the SMART goal formula when setting that goal. Such a monumental goal wasn’t achievable in 1961. Even in 1969 it was an unbelievable goal.

In fact, let’s agree to change the “A” in SMART to “U” for unbelievable or unprecedented. And if we shuffle the letters around, we can make a new acronym: STRUM goals. (Kinda like a guitar . . . I like the sound of that!).

Interestingly, two synonyms for strum are jam and improvise. When musicians jam or improvise, they’re playing with music, coming up with new sounds, sequences and rhythms. They’re creating. That’s what we need to do as we follow the STRUM goal formula.

Following are some questions to ask in order to generate some goals that could be unbelievable or unprecedented.

1. What are you currently striving toward that only requires sissy goal setting? Forget that achievable-goal nonsense and leave the realm of safe goal setting. Instead, consider setting a goal that is so big, you may not even have the know how for accomplishing it yet. Then, set about gaining the knowledge, skills and strategic relationships to make it happen.

2. What would be a “shoot-for-the-Moon” goal for you? Four years ago one client, Ray Edwards set an unprecedented goal for his business to make a million dollars in a year. He has hit or exceeded that goal three years running. Hal Elrod wrote his first book, The Miracle Morning for Entrepreneurs, and set an unbelievable goal to sell a million copies! And he did it. What’s your unbelievable goal?

3. How might you “jam” or “improvise” with your team? Some years ago, when McKinney, Texas brothers Paul and David Bettner along with their cousin Michael Chow heard that Apple was going to make their software development kit available to the public, they teamed together to brainstorm apps they might create. During those playful “jamming” sessions, among other concepts they came up with the idea for the Words With Friends app. It became the number one app for months running, the most popular iOS game in 2017, and led the market in creating social networking game apps.

Nearly anyone can hit an attainable goal. There’s no stretch, no reach, no challenge there. Leave the safety of achievable goals and dream big! Your possibilities are only limited by your imagination.

No comments to show.