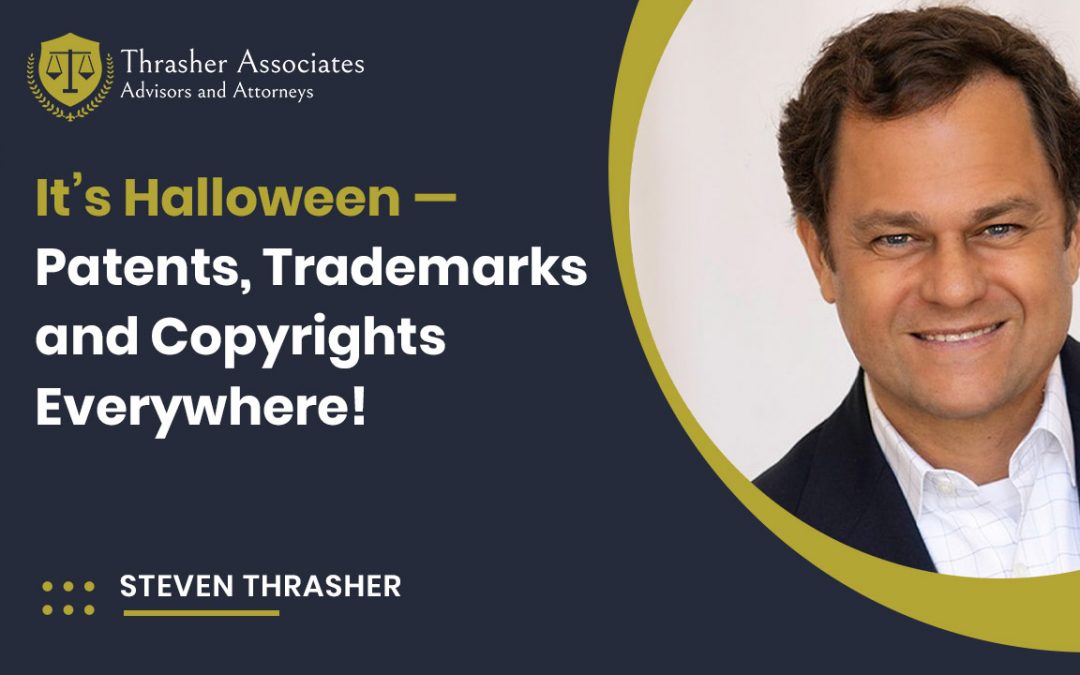 But, while most people see kids dressed up as goblins and ghouls out to gather candy, I on the other hand see Patents, Trademarks and Copyrights everywhere!

I see a gorgeous Trademark Registration!

Such as this Light Diffusing Novelty Lamp by Will Niskanen:

It’s not just for Halloween anymore . . .

Like this plastic ghoul that hangs by a coat hanger . . .

And most of all Copyrights

Because copyright registrations don’t publish, showing a registration would be a bit tough, but you better believe that these sculptures are Copyrighted!

As well as copyrights on their webpages — even their store lay-outs — and much more!

So, when you arrive or host that party, or when ‘hoards’ of kids knock at your door, be on the lookout for patents, trademarks and copyrights everywhere!  And, keep in mind that there are just as many ways to protect your creations!

And Now… How To Generate More Ideas than You’ll Know What to Do With!

I’ve got something for you that I thought that you’d find extremely helpful!

And, both stories are about being creative.

First, you may recall a gripping portrayal of creative “ideation” in the movie Apollo 13. When the space module suddenly experiences a serious malfunction, the ground crew must creatively solve a life-and-death problem by providing the space crew with a makeshift CO2 filter. The space crew is running out of life-sustaining oxygen and the clock is ticking on their lives!

The ground-crew dumps boxes of random parts on a worktable. And the leader tells his team, “We’ve got to find a way to make this (a large square scrubber) fit into the hole for this (a small round, cylindrical filter) using nothing but that (a pile of odds and ends that can be salvaged from the space module itself).” After a night of frustration, and a few failures, the ground crew comes up with a creative solution and saves the lives of the space module crew members (and possibly the space program itself). Beyond the drama of that intense situation, I find that scene so fascinating because this team was able to come up with a creative, life-saving solution under intense pressure with limited time and scant resources. We don’t often think of creativity and idea generation within such cramped and high-pressure confines.

Many view creativity and imagination like luck, or a series of fortunate but unexpected events.

Is creativity purely serendipitous or can we exercise it, grow it, and plan for it?

Send me an email or jump in our Facebook Group and let me know what you think!

1. The greatest enlightenment often occurs at the darkest hour. When all seems hopeless; when you’re at the end of yourself and things look bleak, that’s when the shining ray of an idea breaks through the darkness and lights up your way.  VIktor Frankl, in Man’s Search For Meaning, observed in the concentration camps of the second world war that this ray of light often shows up as a discovering one’s purpose with crystal-clarity.

In the midst of pain and suffering—whatever its source—our first human reaction is to flee from it.  We want it gone.  We pray for deliverance.  But trials, pain and suffering have a way of revealing what we otherwise could not see, and causing us to grow in way we might otherwise resist.  So, perhaps if you find yourself in a pinch, try to leverage the trouble to release your creativity.

2. A great idea often begins like a lowly worm — just a hunch.  But when we allow it to cocoon and incubate, it emerges in its fullness capable of soaring to great heights and inspiring even more imagination.  Don’t underestimate the potential of any idea.  Write it in down (especially in a journal).  Pursue it, let it morph and flourish.

3. One friend (Ray Edwards) compares ideation to the travail of childbirth.  We might like to think that great ideas simply appear vividly as in a vision, without struggle or effort.  But the best ideas usually come after hard labor, so keep at it!  Don’t simply write down an “idea,” flesh it out — how will you improve it, manufacture it, bring it to market?  How will your future customers use it?

4. But . . . not every idea has a future.  Some ideas are like the morning fog that dissipates as the sun arises with its warmth and light.  If an idea is truly out of reach, let it go and let other more workable ideas take their place (lest you be thought of as Emmett Lathrop (the professor from Back to the Future), but without a time-machine).

5. Worry and anxiety are imagination’s worst enemy.  Alan Loy McGinnis observed, “Worry is the misuse of the imagination.” When you let worry and anxiety occupy your mind, it saps your imaginative strength and robs you of what you might productively create (rather than all those imagined worst-case scenarios that never come true).

6. Playing unlocks the shackles of the mind. Too often, we are all bound up in the confines of being too “adult” and too “grown-up.” This is an artificial prison from which you must free yourself. Give yourself permission to play with an idea as a child would, freeing you to new discoveries.

7. Don’t stop playing with an idea until you’ve looked at it every which way. In tandem with the previous principle, look at an idea like a Rubik’s Cube, turning it every which way trying new solutions, combinations, and applications.

8. Cultivate an appetite for childlike curiosity. Greet each day and situation as though it was your first. Open your eyes and ears to all the wonder around you. Ask great questions. Turn over every rock. Learn something new every day. Bask in the thrill of discovery.

9. Believe that there is a unique solution and that you can create it. “Belief is the thermostat that regulates what we accomplish in life. A person is a product of his own thoughts. Believe BIG! Adjust your thermostat forward. Launch your success offensive with honest, sincere belief that you can succeed. Believe big and grow big.” – David J. Schwartz, in The Magic of Thinking Big.

10. Imagination is a divine gift. The Bible claims that God created us in His image. If this is true, then we bear the image of the most creative Being in the Universe! Think of that!

How to Generate Countless Ideas

Are you looking for ideas for new products, blogs, videos, podcasts, newsletters, copywriting, or writing books? Here is a simple process for creating ideas:

When you follow through with that exercise, you’ll come up with more ideas than you know what to do with. Your mind will be brimming with thoughts about which ones to tackle first and how to do so. But I’ll leave that topic for another time.

No comments to show.